A ten-thousand-mile journey to find a golden beetle 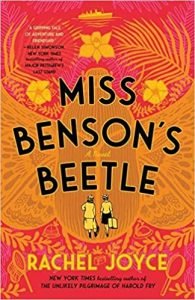 Did you read The Unlikely Pilgrimage of Harold Fry? It’s about a retired Englishman who receives a letter from an old friend who is in hospice care some six hundred miles away. He quickly writes her back, but instead of mailing the letter, he decides to hand carry it, and starts walking toward her. It was a quirky book and very dear.

Now, the author, Rachel Joyce, is back with another quirky and dear book: Miss Benson’s Beetle. In this one, a much-thwarted woman in mid-life reaches a breaking point and leaves her life behind in London in 1950. Her pilgrimage is in search of “the golden beetle of New Caledonia,” which may or may not exist. She read about it when she was ten-years-old. Just for the record, New Caledonia is a French archipelago in the South Pacific, and it is ten thousand miles away by sea.

Margery Benson knows she will need help on her expedition, so she advertises for an assistant. Four people answer the ad. Two would be appropriate for the job, but of course, they turn it down. Of the remaining two, there is Mr. Mundic, a demobilized soldier who was a POW in Burma during the war and who seems a tad unbalanced emotionally, if not outright dangerous. The other is a woman named Enid Pretty who doesn’t seem very bright. She applied to the ad by writing a letter that said, “bear miss denson, Is the jod still avaladle?” The letter paper seemed to be part of a grocery list as it also said, “Milk, Epsom slats, caddage.”

By default, Enid Pretty becomes the assistant, but unbeknownst to the women, Mundic follows them on the adventure. This adds a bit of menace to an otherwise lighthearted tale.

In literature, there are a lot of books where a strange group of people come together to become a loving pseudo family. That’s exactly what happens here. We watch as the characters build the bonds of friendship while overcoming one problem after another.

One of the problems they have to overcome, however, is Margery’s basic personality. To explain this, I turn to another familiar plot in literature in which a character has had a very difficult childhood. I’m thinking of the title character of Eleanor Oliphant is Completely Fine. I’m thinking of Lucy Barton in all three books written about her by Elizabeth Strout. And in a similar fashion, Margery Benson has a childhood that may have scarred her for life. We learn about it in the first few pages when all four of her brothers die in the same battle in the war. Her father gets the news: “All of them?” he said. “What? All?” And then he immediately gets a gun, goes outside, and kills himself. Can Margery overcome such a start in life?