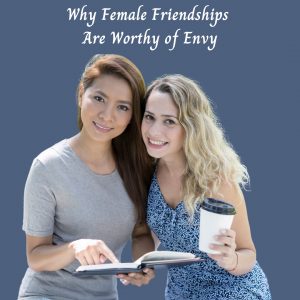 A male friend – both of us single – recently asked me if I thought women did better on their own or men. To me, that was a no-brainer. It’s women of course! Why? Because we are so much better at friendship! I was reluctant to say that to him, however, because he likes to find occasions where I am wrong, wrong, wrong. Thus, I came home and researched the subject. Recognizing fully that research can be bent to validate desired findings, here is what I learned. I’ll give you the funny first and then get serious and then even more serious.

You will love the first topic I Googled: Why is it better to be a woman? I came up with a story on Spirit 1400 AM that shared 50 reasons such as these:

Getting more serious with this list, however, women have a lot to talk about. We talk about dealing with:

These are much meatier topics than discussing sports and cars. In having these more meaningful discussions, we bond with each other.

Getting a little more serious, here are the recipes for male and female friendships

An article in Psychology Today by Kristen Fuller, M.D. tells us that female friendships thrive on intimacy, emotional connection, and mutual support. Face-to-face contact is the name of the game. Male friendships are more transactional. They are based on shared activity such as playing basketball or poker, watching sports, or putting in a new mailbox together.

It is believed that the face-to-face contact between women releases oxytocin, a hormone that is a “love potion” of sorts, helping with bonding. It is the hormone that is released during childbirth and nursing. It is responsible for the “motherly instinct.”

This is a seriously potent hormone. Fuller tells us about a study published in the Journal of Clinical Oncology where “women with early-stage breast cancer with a [large] group of female friends have a higher survival rate.”

What about men and oxytocin? Hold on a minute. Let’s first talk about…

In the year 2000, two women scientists at UCLA, Laura Cousins Klein, Pd.D. and Shelley E. Taylor, Ph. D., joked that when female scientists in their lab were stressed, they cleaned the lab, had coffee, and bonded with each other. Their male colleagues holed up alone instead. When they soon realized that 90% of all studies about stress had been done on males, they realized they were onto something.

All these years later, the APA Dictionary of Psychology calls this something the tend-and-befriend response.

You can read the 43-page study by Dr. Shelley E. Taylor or a two-page explanation by Melissa Kaplan. Either way, you will learn that men produce oxytocin too but that testosterone reduces its effect, while estrogen enhances it.

Women need to get excited, puffed up, and proud about this finding! Men only have one way to deal with stress. Women have double that!

This has significant implications for women’s health. Study after study shows that women consistently outlive men thanks to these social ties. They “reduce our risk of disease by lowering blood pressure, heart rate, and cholesterol.” Indeed, a study from Harvard Medical School, the Nurses’ Health Study, found that NOT having close friends was as bad for your health as smoking or being overweight.

This information should give men a case of oxytocin-envy as opposed to that other envy they have tried to foist upon women for decades. It should also make women understand and appreciate what they are really doing when they putter continuously in the kitchen.

I saw a funny Speed Bump cartoon written by Dave Coverly. It showed three men at a book store. One man was by himself and then a couple feet over, there are two men standing a foot-length apart. The first man is in the “Do-It-Yourself” section, while the duo is in a section called, “Do-It-Yourself-With-Good-Friends-And-Pizza-And-A-Few-Beers.” Though I am proud of the duo, I can hear their conversation as they work together, “What do you think about them Bengals?”

I have to wonder, is there a Mrs. Dave Coverly? What might she have drawn instead? I’m thinking it would be two women in the book store coffee shop, heads together and laughing as they pour over the great book they have found, Why Female Friendships Are Worthy of Envy. Thanks to the big chocolate brownie they are sharing with their venti lattes, no further caption would be necessary.

Here’s my M.O.: I tell the stories of my life hoping others can find life lessons in them. AND I function as a cheerleader with the core message: Life can be difficult but you can handle it. Like these topics? Then subscribe to my blog! And tell a friend!