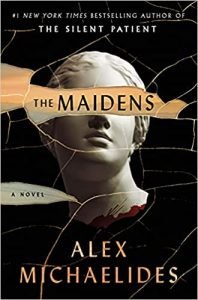 Alex Michaelides’ first book was The Silent Patient. It debuted in 2019 and spent more than a year on the New York Times bestseller list. It also sold in fifty countries, which was record-breaking. That is a tough act to follow. But as it turns out, the author did just that. He followed exactly in the heels of his first book to churn out a second. No, I don’t mean that he wrote a great book that will top the best seller charts. I mean he used main elements from his first book to write his second. Specifically, he has a psychologist who becomes a rabid detective to investigate a grisly murder.

In both books I wondered about that psychologist-to-detective transformation. Why would the psychologist be so obsessed?

In The Maidens, Mariana Andros is a 36-year-old London-based group therapist who has experienced a lot of loss in her life. Most recently, her husband Sebastian died tragically. A half dozen years before that, she became the guardian of her college-aged niece, Zoe, after both of Zoe’s parents died. And of course, Mariana’s parents are dead too.

The book opens as Zoe calls Mariana to tell her about a gruesome murder at her college in Cambridge. It is Zoe’s friend, Tara, who is dead. Marianna travels to be at Zoe’s side and immediately begins to investigate.

In this manner we learn about Edward Fosca, a charismatic Greek tragedy professor at Cambridge. Fosca has a not-too-secret society of female students who adore him. They are called the Maidens. Tara was in this club, as were the next two young women who get murdered. And oh yes, Zoe was a part of the group too though briefly.

The opening lines of the prologue tell us Mariana’s thoughts on all this:

“Edward Fosca was a murderer. That was a fact. This wasn’t something Mariana knew just on an intellectual level, as an idea. Her body knew it. She felt it in her bones, along her blood, and deep within every cell.”

As we move through the book, Mariana sets out to prove this. Interspersed with chapters on her investigation are periodic diary entries from the presumed murderer. But who is it? Fosca? Or perhaps the slightly deranged patient from one of Mariana’s groups in London who follows her in a threatening manner? Or maybe the young man she meets on the train to Cambridge who falls for her instantly? Or maybe Mariana is an unreliable narrator and she’s it?

You’ll have to read the book to see.

Where to place this book in your TBR pile:

This quote from book critic, Maureen Corrigan, will tell you where to put it in your pile of TBR books…

Maureen Corrigan is a book critic for the NPR program “Fresh Air.” She also teaches literature at Georgetown University. She wrote a review for this book that appears in the Washington Post. She closes her review this way:

Throughout “The Maidens,” Michaelides quotes from the melancholy poetry of Alfred, Lord Tennyson, one of Cambridge’s most celebrated poets. But a line from another Cambridge poet seems to me more apt as a final pronouncement on “The Maidens.” I’m thinking of A.E. Housman, who was a professor of Latin there in the early 20th century. Housman wrote the long poetry sequence “A Shropshire Lad,” which contains the oft-useful line, “Terence, this is stupid stuff.”

I have to agree with Maureen Corrigan’s evaluation of the book.

BTW, Here is my review of The Silent Patient. 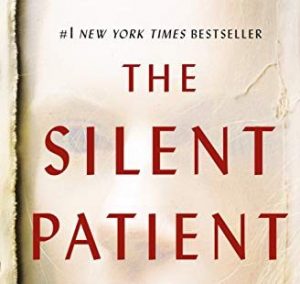