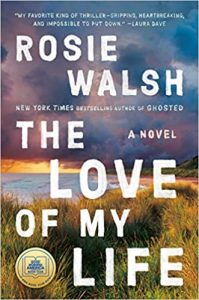 Emma and Leo are a very happily married couple. They have known each other for almost ten years and have been married for seven. They are the parents of a three-year-old daughter named Ruby.

Emma is an intertidal ecologist. This means she studies the places and creatures that are submerged at high tide and exposed at low tide. Her main research interest is crabs. She even had a BBC wildlife series some years ago for which she is still widely known.

As the book opens, Emma is waiting for the results of a PET scan that will show the success or failure of her recent treatment for a recurrence of non-Hodgkin’s lymphoma.

Emma’s level of celebrity and her illness make her the perfect object of Leo’s profession – he’s an obituary writer at the local newspaper. It is customary to have stock obituaries on hand for celebs, especially those with a known illness.

As they await the test results, Emma asks Leo for a favor, that if there is bad news, he won’t pre-write her obituary. Of course, he makes the promise. But of course, that is exactly what he is already doing. In his mind, he is writing a hymn to the woman he loves deeply and completely, to the woman he knows through and through.

Almost immediately, there’s a major problem. Actually, there are many major problems. As he researches her, he learns that she has lied to him about everything. She had an entire identity as “Emily” before she legally changed her name to Emma. Emily even has a police record. Oh, and it’s possible that since Emma did not disclose the name change when they got married, that they aren’t legally married. But there’s more, there seems to be some indication that Leo is not the father of Emma’s child. Say what?!

The reader is then given a complex plot with lots of crazy twists. However, all the characters are likable and once the reader learns the full truth, every action of every character is totally understandable. Yes, characters made some awful choices! And how did I feel about those choices? Grateful! I was glad I was not in the characters’ shoes because I would have been making the exact choices and suffering the same consequences.

Very good book. I recommend it.