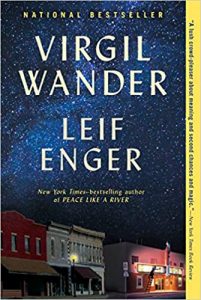 Virgil Wander describes himself as a “Midwestern male cruising at medium altitude, aspiring vaguely to decency, contributing to PBS, moderate in all things including romantic forays, and doing unto others more or less reciprocally.” As the book opens, the world is changing for him. Two key events cause this. The first is his recent release from a hospital after suffering a “mild traumatic brain injury” in a car crash. The second is the arrival in town of an old man named Rune who is looking for the son he only just learned he had, Alec Sandstrom.

The town in question is Greenstone, Minnesota. As for Alec Sandstrom, he is an enigma known by all in town. He was a failed minor-league pitcher whose fastball had its own nickname, the Mad Mouse. He was written up in Sports Illustrated after he “strapped himself into a small plane at dawn, lifted off in a light westerly, and banked out over Lake Superior never to return.” Sandstrom left a wife and child behind, Nadine and Bjorn. They are key characters in the book. Bjorn is a soon-to-drive teenager as the book opens.

Thanks to the head injury Virgil sustained, his memory is altered. On his return to his apartment post hospitalization, it does not feel like home, indeed it feels like it belongs to someone else. He says, “The evidence of my life lay before me, and I was unconvinced.” As for the clothes in his closet, he first feels like he is borrowing clothes from his former self, but then decides that “the previous tenant [is] dead. Poor Virgil didn’t actually make it.” Additionally, his language skills are gone – adjectives are missing from his vocabulary.

As the book progresses, we learn a lot about Alec, Rune, Nadine, and Bjorn. We learn about many others like Tom Beeman, Don Lean, and Marcus Jetty.  We learn about the movie theater Virgil operates in Greenstone and about his other job as an assistant to the Mayor, Lydia Fatz. There is a community festival in the works that we watch come to life as well.

And of course, coming to life – or coming back to life – is what this book is all about. The “previous tenant” is gone. Thanks to the care and concern of many friends and town folks, and thanks to all the activities of daily living, the new Virgil Wander arrives.

As you sit down with a good book, be sure to enjoy a cup of coffee served in a BIG mug from my etsy shop. Many designs from which to choose. 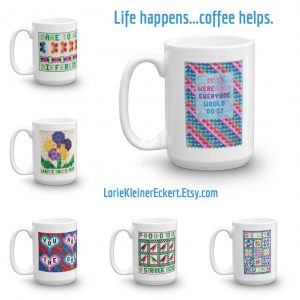 Share this on Social Media
Previous Post: « If You Don’t Know What Introspection is, You Need to Take a Long, Hard Look at Yourself
Next Post: State of Terror by Hillary Rodham Clinton and Louise Penny »