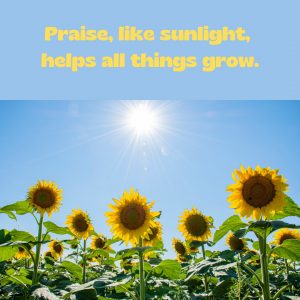 Years ago, when my kids were little, my parents overheard me praising them. A conversation ensued. Mom and Dad claimed such compliments would help swell the kids’ heads, while I asked the question: If I don’t tell them they’re doing a great job, how will they know?

Here’s how I knew I was doing a good job as a child: Mom and Dad boasted to Aunt Tillie about my accomplishment. Aunt Tillie then told her daughter, Loie, about it. And finally, Loie told me of the acclaim. By the way, there are many reasons to love my cousin Loie, but it certainly amplified our relationship for her to be the passer-on of praise to me.

Yes, yes, yes, I know that as an adult I should be able to know when I have done a good job without someone else telling me. But, no, no, no, that’s not really how it works for me. I need praise, positive reinforcement, and pats on the back. And if you must give me some constructive criticism, know that my soul will receive it as a put down, so please serve it with a put-me-up to even the score. Or here’s an idea, how about two put-me-ups? That will re-inflate me and get me moving again.

In defense of Mom and Dad’s stance, ParentingScience.com shares an article called “Seven Evidence-Based Tips for Using Praise Wisely.” In it, they say traditional cultures around the world have always told parents to avoid praise stating that it could make kids overconfident and too full of themselves.

They go on to claim that today things are different. Today people think praise can be effective to reinforce good behavior. But it’s only good if we use praise wisely. For instance, they say to praise kids for things they can control, not for being gifted with special abilities. Such semantics – say it like this, not like this – make my eyes roll. OMG! What happens if we say it unwisely? Oh yeah, we’re back to swelling the heads of kids.

I think this is hooey and that we should toss out this nonsense! I stand firmly in praise of praise – for kids and for adults.

Agreeing with me on this topic is Hans Poortvliet of the Netherlands. He is a member of a non-profit called Recognition Professionals International. This organization is comprised of business professionals who promote the art and science of employee recognition. In the early 2000s, he created a national day for compliments. Its popularity grew quickly and to far-flung countries. It is now celebrated annually on March 1st as World Compliment Day.

An article in the Leiden Psychology Blog touts this holiday and tells us about “The Science Behind Praise.” It quotes a study where participants’ brains were scanned using an MRI. It found that “receiving compliments led to similar activation in the reward areas of the brain, such as the striatum, as receiving monetary gifts.”

Had I been hooked up to an MRI, I am sure this next story would have shown my brain to be as lit up as if winning the Mega Millions lottery. I was at my folks’ house helping them with their computer and printer. Suffice it to say they were terrified of this technology and were clueless about how to solve their problem: a relatively new, but infrequently used printer cartridge was not working. This was in the year 2000, so I think it was a phone call to the cartridge company – not a Google search – that instructed me to take the cartridge out, dab it with a wet paper towel, then reinsert it. I followed the instructions, and voila, the printer printed again!

Mom, who had been nervously watching me, shouted to Dad who was in another room: “Your daughter is a genius,” she said, “come see what she figured out!”

I had waited a life time for this moment! Praise from my parents! In so many words. To my face. Not via the Tillie-to-Loie grapevine. It wasn’t shouted from the rooftops, but from the family room. Good enough! And guess what? My head didn’t swell, it just got a bit pumped up from its sometimes-shrunken state.

Remember the old skit on Saturday Night Live with body builders Hanz and Franz? Their funny tagline was “We want to pump you up!” That’s what I want to do too. I want to pump up people through positive comments, recognition, and compliments. And I am not ashamed to say that I want to be pumped up too.

We give journalists Pulitzer Prizes. We give actors Academy Awards. We give scientists and statesmen Nobel Prizes. Likewise, I want to acknowledge the accomplishments of my kids, friends, and self as I stand firmly in praise of praise.

A call to action: Give yourself All A’s! This quilt design is available on Etsy as a notecard or downloadable art print. 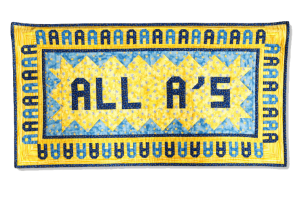