Can a Woman be Independent AND in a Relationship? 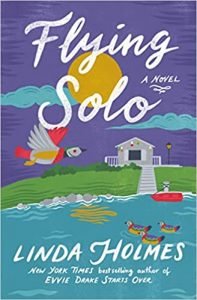 Laurie Sassalyn is a freelance writer living in Seattle. She is very conscious of the fact that she is soon to turn forty. Making this milestone even more troublesome is the fact that she has just called off her wedding weeks before it was to take place. If that isn’t enough to throw her for a loop, her beloved Aunt Dot has just passed away in Laurie’s hometown of Calcasset, Maine.

Dot had never married, so she had no children to clean out her house, which was jam packed with memorabilia of her colorful life. Since Laurie is a freelancer, she can be flexible in arranging her time. Therefore, she is the family member who takes on Dot’s house. As a bonus, going home for a few weeks gets her away from her Seattle friends and the ballyhoo over her broken engagement.

In cleaning out Dot’s house, Laurie employs a company called Save the Best. It is a service that inspects the house of a person who is either dead or downsizing to determine if there are items worth selling. If so, they help sell those items. And of course, they haul away the rest. Matt is the owner of the company.

Such a business can be a godsend for families, but unfortunately, as Laurie is about to find out, Matt is a con artist. And fortunately or unfortunately, there is something at Dot’s house that might be worth a lot of money…

It is in the first chapter of the book that Laurie finds a wooden duck at the bottom of Dot’s cedar chest. It is unlike anything else in Dot’s house. It is also odd that it was hidden away. Lots of time is spent researching this duck. It may or may not be the work of Carl Kittery, a man who was famous for carving wooden decoys between 1940 and 1980. The only thing is, the mark on the bottom of the duck is similar to Kittery’s mark but not exact. And though Kittery had a very specific way of painting feathers – and the duck has such feathers – Kittery was not known for making duck decoys.

So, is it valuable or not? And why did Dot own it? And what is Laurie going to do after Matt-the-con-artist tricks her into selling it to him for fifty dollars?

Many people help Laurie solve the mystery of the duck. These same people help her find revenge against Matt. Laurie’s old boyfriend, Nick, is one of the helpers. Conveniently, he is newly divorced. In the process of working together, they rekindle their relationship.

And as much as there are pages and pages devoted to the duck, it is this relationship that is the main issue in the book. Here is a woman who as the book title suggests, likes flying solo. So how is she going to fit a man – even this most beloved hometown honey – into her life? Please note that Dot was another woman who liked flying solo. She never married. Is that the only workable possibility for independent women?

If you read Linda Holmes’ first book Evvie Drake Starts Over, you will recognize some similarities between the books. For one thing, both are set in the fictional town of Calcasset. But more important is the fact that both involve couples finding love in midlife.

Love in midlife. That’s what Linda Holmes writes about. In this newest book, she dresses it up with the mystery of the wooden duck. Next time, I hope she sticks more closely with the main topic.

Here’s what I want, Linda Holmes: I want the nuts and bolts of how a relationship would work – over the long haul – for a solo flying woman and the person she loves.