Hobnobbing with royalty and famous folks 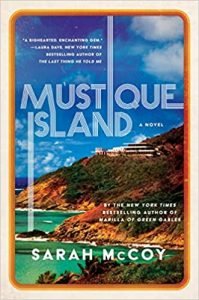 The book jacket will tell you that Mustique Island in the 1970s was the playground of privileged folks like Princess Margaret and Mick Jagger. Of course, these are names I recognized. The book jacket also mentioned a British playboy named Colin Tennant and a former beauty queen from Texas name Willy May Michael. I did not know these names. Did these people really exist or were they fabricated by the author? Other names early in the book caused this same question to arise.

It is helpful therefore to say up front that Colin Tennant was a real person, indeed, he was the 3rd Baron Glenconner. This made his wife, Anne, a baroness. According to Wikipedia, they bought Mustique (in the Grenadines) for forty-five thousand pounds and gave a plot of land on the island to Princess Margaret as a wedding gift. Eventually, the princess built a holiday retreat there named Les Jolies Eaux.

As for Willy May, in a note at the end of the book, the author tells us that her character is built on the real-life Texan named Billy Ray Mitchell who “married and divorced a British brewery baron, built her own boats, sailed to Mustique Island, constructed a home named Firefly, and lived there for a time with her grown daughters.”

The strongest parts of this book are the back stories the author creates for Willy May and for her daughters. Hilly is a model who is recovering from a romantic relationship that went astray, not to mention a drug addiction. And oh yes, she is pregnant. Daughter Joanne is a musician who comes to visit her mother and sister and to help out with the pregnancy. While on the island, she falls in love with a man who is an assistant to Mick Jagger.

The relationships between Willy May and her daughters are at the crux of the book. However, the novel would not stand alone with just these three women. The famous folk walking in and out of the background are mandatory to capture the interest of the reader. And since the island really exists, if you want to get truly excited by the story, check out the scenery via a Google search of Mustique Island, or look for Willy May’s home, Firefly.

Please note that I was given a review copy of this book by the publisher.