All the World Disasters You Don’t Let Yourself Think About 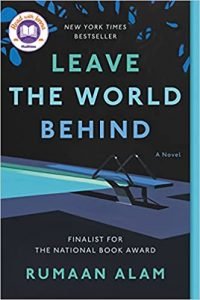 Each year Barack Obama puts out lists of favorite books, movies, and music. In 2021, Leave the World Behind was on his list. Now I see that the Obamas’ production company, Higher Ground, is joining with Netflix to create the film adaptation. The film will star Julia Roberts, Ethan Hawke, Mahershala Ali, and Myha’la Herrold.

That’s enough to make me want to read the book. But wait, there is more. The book was A Read with Jenna Today Show Pick.  It was a finalist for the 2020 National Book Award. And it was a Best Book of the Year from The Washington Post, NPR, Time, Esquire, Elle, and more.

And so, I read it, and I thought it was great too, though it was not at all what I was expecting.

Amanda and Clay and their children, Archie and Rosie, rent a home in a remote corner of Long Island for their vacation. As the Airbnb ad read, “Step into our beautiful house and leave the world behind.” The house is too far from civilization to offer cellular service, but there is supposed to be WiFi.

The family’s enjoyment of the luxurious house is interrupted on the second night by a knock on the door. A knock on the door? In the night? In their extremely remote location that even GPS could not find? Cue some scary music! Indeed, this is what I thought the book would be about – bad guys arriving after dark to menace and harm good guys. But that was not the plot.

Instead, Amanda and Clay cautiously open the door to find an older black couple, Ruth and G.H. Washington. They claim to be the owners of the house and they want to come in. They explain their plight this way: They were leaving a concert in the Bronx when something happened, a blackout! They couldn’t go to their home in the city because they lived on the 14th floor, so instead they drove out to Long Island to the home they had rented to Amanda and Clay.

Interestingly, Amanda gets a news alert on her cell phone validating this story: The alert from The New York Times says, “Major blackout reported on the East Coast of the United States.” Though she receives this alert, the WiFi somehow is not working well enough for her to click for more information. Indeed, three more alerts show up on her phone, none of which allow her to click for more information. The last one was especially concerning because it was gibberish. And then the WiFi went out completely. Likewise, though the power remained on in the house, the TV could not pull up channels to get the news.

So, let’s recap. No cell phone service. No internet. No television. Though Amanda and Clay are still leery of Ruth and George, it seems there’s a whole lot more to be worried about. Indeed, you know all those things in modern life that you don’t let yourself worry about? This book tells you it is time to start worrying about all of them.

If you read this book, don’t just cue the scary music, realize that you have entered The Twilight Zone.