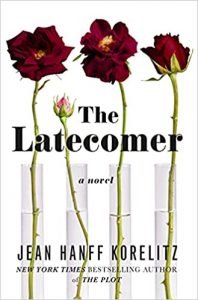 This is the story of the Oppenheimer family. The parents are Salo and Johanna. With the help of in-vitro fertilization, they have triplets. As the author tells us, Harrison is the smart one. Lewyn is the weird one. And Sally is the girl. Much later, as the triplets are about to go off to college, a fourth child is born, Phoebe.

The book is told in three parts. The first explores Salo and Johanna’s relationship and the birth and early school years of the triplets. It culminates in Phoebe’s birth. The second section tells the college adventures of the triplets. This section ends cataclysmically. It seems everyone had a family secret they guarded, and at the annual birthday party for the triplets, all secrets were revealed. In the aftermath of that evening, the family would never be the same. With the third section, Phoebe is grown and we watch her as she learns the magnitude of the secrets and looks for ways to mend the family.

A heart wrenching fact is at the center of Salo and Johanna Oppenheimer’s relationship. In the 1970s when Salo was a student at Cornell, he was driving a Jeep that rolled over killing his girlfriend, Mandy, and a fraternity brother. Salo and another passenger in the car survived with minor injuries. Though the instability of the car was at fault and not the driver, one can only imagine what it is like to live with such an experience. Johanna, who was a friend of Mandy’s, takes on the task of helping restore Salo to the world of the living after the accident.

This proves to be almost impossible. Salo is on automatic pilot as they marry, have infertility issues, and ultimately have children. The only thing in which he finds any passion is art.

It would be nice if the children could bring an outpouring of love to the family after they were born, but instead, they seemed to hate each other from the get go. “So powerful was the mutual aversion, and so ironic, given the triplets had never actually been apart, that you might even have said it was the single thing the triplets actually did share.”

At the cataclysmic birthday party, Lewyn knows a scoop about Sally that he tells Harrison. Harrison throws it in her face just as Sally exposes Lewyn’s secret to the entire family. And in the midst of the pain she feels from being exposed in this manner, Sally confronts her father letting him know his secret is not so secret after all. This causes him to leave the family. Oh, what a night! Ka-boom!

Lots of talk about art, a look – or two – at hoarding, a flirtation with Mormonism, a comedic look at private schools for the wealthy, interracial relationships, and more fill up the pages of this book if family dynamics are not enough. I loved sections one and three especially and learned a thing or two in the second. I recommend it highly. In fact, after reading two other books by this author – The Plot and You Should Have Known – I recommend anything Jean Hanff Korelitz writes!