The Rocky State of a Rock Star’s Life 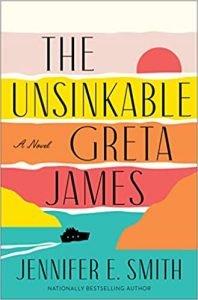 Greta James is a musician, actually a rock star, who is stuck on an Alaskan cruise ship for seven days. This gives her lots of time to ruminate about the problems in her life, which are twofold.

Her first problem involves men, four of them to be exact.

Greta’s second problem is that she is reeling from her mother’s sudden death three months ago. This fact has professional and personal ramifications.

So why is she on a cruise at this point in time? Well, her parents had booked the trip to celebrate their fortieth wedding anniversary and Greta is standing in for her mom.

Clearly, Greta has many questions about her life, beautifully summed up this way: “Greta finds it almost painful sometimes to think about all the different lives she could be leading, to know that every choice she’s made has meant the loss of so many other possibilities. Every day, more doors close. Without even trying, simply by moving forward, you end up doubling down on the life you’ve chosen. And the only way to survive is to commit to it fully, to tell yourself it’s the right one. But what if that’s not true?”

So there you have it, a rather fluffy book with lots of food for thought!