behind the scenes at a book store 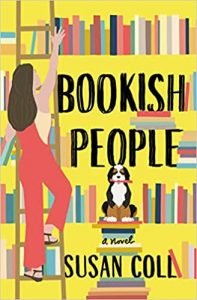 Author, Susan Coll, spent years working in an independent bookstore in DC, so she knows her bookstore stuff and shares it with us.

The book opens with bookstore owner, Sophie Bernstein, either throwing a book galley (an advance copy of a book) across the room or pounding it down on a table thereby causing a cup of coffee to splatter all over the publishing rep who is promoting the book. The cause of her annoyance was her dislike of the book’s cover design. Hmmm. A little short tempered. We have to wonder why.

It is not long before we learn the two main things upsetting fifty-four-year-old Sophie. First, she has recently buried her husband of twenty-five years, Solomon. Second, the book is set in Northern Virginia days after the white supremacist rally in Charlottesville. Sophie is Jewish, and as the author tells us, “It was impossible to grow up Jewish in this world and not have events like those in Charlottesville add to the traumatic inherited memories that already keep you up at night.” Since Solomon died quoting Otto Frank, Anne Frank’s father, the two events blur together to have even more significance to Sophie.

Because of this, Sophie is building a refuge for herself inside the bookstore. There is an architectural fluke in the building that has created a tiny space. This hidden room is accessed by pressing a button in the corner of a shelf in the fiction room of the store. Currently that shelf houses books by Graham Greene. No one knows about this room except for Ibrahim, the architect who designed the store. Sophie is planning to go into hiding there.

Another main character in the book is Clemi. She is in charge of all author visits at the store. An upcoming event is causing lots of commotion. Poet, Raymond Chaucer, is supposed to visit. But bookstores across America and across the ocean are canceling him after a story in the Guardian compared him to Ted Hughes, the husband of the late Sylvia Plath. Ted Hughes and Sylvia Plath were both poets. The same was true of Chaucer and his late wife, Seema. And both Seema and Sylvia died via suicide using a gas oven. The newspaper article exposed a reason for Seema’s suicide. It seems that Chaucer had been having a long-term affair and may have even fathered a child in that relationship some twenty-plus years ago. The person with whom he had an affair was his literary agent. And oh, by the way, Clemi’s mom is his long-time literary agent.

It was Sophie Bernstein’s plight that was most compelling to me. I really worried about her and wanted to make sure she survived the book. Thus, I stuck with it even though it went in directions that did not always appeal to me. For instance, there were running gags with vacuum cleaners, a pet turtle named Kurt Vonnegut Jr., and with a roommate of Clemi’s who drilled holes in walls at night. Words like madcap, antics, and hijinks came to mind, and those are not usually words I use to describe books I like. But Sophie Bernstein? I liked her from the first page and I stuck with her until the last one.

If you like the way I wrote this story, you will like other things I have written. Please try my blog and/or my new book, Love, Loss, and Moving On. And if you are in the mood to shop, don’t forget to visit me on Etsy. Thank you!