A Book Full of Misogynistic and Sexist Crap 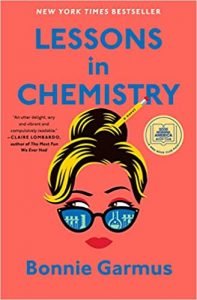 This is a light-hearted and funny book except that it is so full of misogynistic and sexist crap you will want to scream. The book is set in the 1950’s and early 60’s and as the main character, Elizabeth Zott, will tell you, “When it came to equality, 1952 was a real disappointment.”

Elizabeth is a research chemist. She was self-taught up until the time she earned a master’s degree in chemistry from UCLA. On page eighteen we learn that her doctorate was derailed by a sexual attack. In the 1950’s world of he said, she said, UCLA rescinded her admittance to the doctoral program after she was raped by her doctoral advisor even though everyone knew he was scum.

Well then, let me assure you, there is also a lot of humor in the book. For instance, Elizabeth’s daughter, Madeline, is bright beyond her years. She has known how to read since the age of three and at five is already through most of Dickens. After Madeline’s first day of school the author gives us this mother/daughter exchange:

“How was school? Was it fun? Did you learn something new?”

Madeline put her book down, “Well. Some of the kids are incontinent.”

We also get to chuckle over the less-than-ordinary notes Elizabeth puts in Madeline’s lunch box:

And then, there is Harriet Sloane, a neighbor who helps out with Madeline. Very unhappily married but stuck in marriage because it’s the 1950s, she tells us this about her husband: “Like most stupid people, Mr. Sloane wasn’t smart enough to know just how stupid he was.”

So let’s get back to the serious side. As we meet Elizabeth, she is the host of an afternoon cooking show, Supper at Six. Since she tells us repeatedly that she is a research chemist, this job is not at all pleasing to her, but “she took the job for the usual reasons: it paid more and she had a child to support.”

In spite of her negative attitude, her show becomes a huge hit. Why? Because she gives total respect to the women who are at home cooking. She talks up to them. She gives “elaborate descriptions of chemical breakdowns, which, when induced by combining disparate ingredients in heat-specific ways, would result in a complicated mix of enzymatic interactions that would lead to something good to eat.”

Whenever Elizabeth wondered how her life had come to this, it did not take long for her to remember. His name was Calvin Evans, a brilliant chemist. They met in 1952 while working at Hastings Research Institute. They fell in love, and ultimately Madeline was born.

The book goes back and forth from their meeting in 1952 until present day 1961. Thus we get Calvin’s tragic life story, learn all about Elizabeth’s past, and watch her endure the indignities of being a woman scientist – or just a woman in the work force – in that time period. Suffice it to say that the one experience of sexual impropriety at UCLA was not the last episode for Elizabeth.

Fortunately, the author balances all this with lots of motherhood levity like this: “Every day [Elizabeth] found parenthood like taking a test for which she had not studied. The questions were daunting and there wasn’t nearly enough multiple choice.”

One of the best things about this book is the support system Elizabeth assembled – just by virtue of being herself – to create a family for herself and Madeline:

As we root for Elizabeth to get away from the TV studio and back to a chemistry lab, and as we root for her to be a powerful example of womanhood for Madeline, it is interesting to watch as Calvin’s past becomes important to Elizabeth and Madeline’s future. Indeed, by book’s end, happily ever after seems within reach.

If you like the way I wrote this story, you will like other things I have written. Please try my blog and/or my new book, Love, Loss, and Moving On. And if you are in the mood to shop, don’t forget to visit me on Etsy. Thank you!