Everything You Never Knew About the Deaf Community 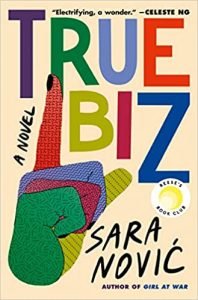 Long ago I took piano lessons as an adult. After the teacher showed me where A, B, C, D, E, F, and G were on the keyboard, I naively – and crazily – thought to myself, “What else is there to learn?” Similarly, because I have a daughter who studied American Sign Language in college – and even threw around the term cochlear implants in my presence – I felt I knew a bit about the deaf community. Oh my! Wrong! Wrong! Wrong! I had a lot to learn and True Biz did a great job of beginning my education about the Deaf community.

This is the story of a residential school for deaf kids. There are three main characters. February Waters is the headmistress of the school and she is a child of deaf adults (CODA). Then there is a new student at the school, Charlie (Charlottte) Serrano, an incoming sophomore. She is the deaf child of hearing parents. And finally, we have Austin Workman. He’s like royalty at the school because his family has been deaf for four generations. It is noted, though, that his dad is not deaf and indeed works as a sign language interpreter in the community.

Charlie and Austin both have troubles at home.

Charlie’s parents are newly divorced. It is clear they struggled mightily over issues surrounding Charlie. Charlie’s dad has been given custody, and as a result she will now get to go to Deaf school. The judge’s ruling came with the stipulation that she still has to wear her much-hated implant during instructional hours even though they give her headaches and even though they are useless for hearing. Shocking to me, it is at this point that Charlie and her dad learn sign language! She’s a teenager already! How could they NOT have learned earlier?!

As for Austin, his life is in upheaval after the birth of his baby sister, Skylar, who can hear! He’s almost embarrassed to tell people about her. And then there is the pain he experiences as he watches his father sing to and fawn over this child who can hear!

As the novel opens, three students are missing on campus, Charlie, Austin, and Austin’s roommate, Eliot. It then goes back in time six months to tell the story leading up to the disappearance.

Beyond this compelling story line, the author shares a lot of basic information:

(Hint: Black kids had better language access during the time that “oralism” took over in white Deaf schools. Deaf teachers were sent to Black Deaf schools since no one cared whether Black kids learned to talk.)

In other words, like moving beyond the A, B, C, D, E, F, and G of the piano keyboard, there is a lot to learn about the Deaf community! And this important book has started my education. I recommend it heartily.

Before closing, let me apologize. I am certain there are places in this review that I should have capitalized “deaf” and places where I capitalized it incorrectly. Clearly, I prove my ignorance and I apologize.

If you like my writing, did you know I have four books in print? They are all available on my Etsy shop. My newest book, Love, Loss, and Moving On, is also available on Amazon. Please have a look, and tell a friend!