Not Your Usual Cooking Class 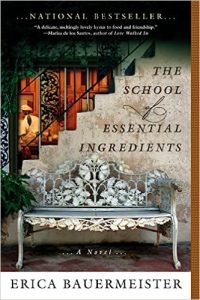 Lillian is a restauranteur in her mid-thirties. Her place of business is closed to diners on Monday nights as she opens her doors to cooking school students instead.

This, however, is not your usual cooking class as Lillian’s idea of a recipe for a Thanksgiving turkey breast will show: “Take ingredients on the prep table, chop as need be. Butterfly turkey and flavor inside and out, as you like. Make a package. Send it.”

Likewise, here is a typical comment from Lillian, “You could sit here all evening and watch the meat absorb the wine. It’s amazing what you’ll end up thinking about. Plate tectonics. A child in your lap. Crocuses.”

My book club read this book and some found passages like these to be charming and just-what-the-doctor-ordered during troubled times like the world seems to be in now. Other book club members needed more – such as recipes that spoke in terms of teaspoons-ful and cups-ful.

The book has ten sections. The first one tells us about Lillian’s background. Then there is a chapter for each of the eight students. And finally, there is an epilogue.

Here is a little bit about each of the students:

In this manner, the reader gets into the heads of all the characters. Lots of interesting back stories are revealed. And by the time of the epilogue, some connections between the students have been made. We can root for their happy endings on the personal level even if we can’t quite fathom their future success as cooks.