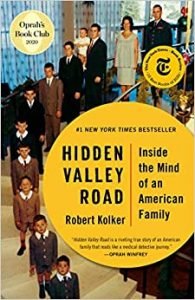 This is the true story of Don and Mimi Galvin and their twelve children, six of whom developed schizophrenia. It is also the story of researchers who have spent decades trying to understand the unfathomable disease.

The book is divided into three sections. The first tells the story of Don and Mimi, their backgrounds, their marriage, and their choice to have a dozen children between 1945 and 1965. Ten sons are born first and then two daughters. It is six of the sons who develop schizophrenia.

As the oldest sons, Donald and Jim, begin to display symptoms, Mimi’s parenting style gets blamed and she is labeled a “schizophrenogenic mother,” the first of many wrong explanations of what was happening to her family. All sorts of awful things happen in this section as more sons fall ill. There is the murder-suicide of their son, Brian and his girlfriend, not to mention the repeated sexual abuse of the daughters by their brother, Jim.

The second part of the book introduces us to researchers who study the Galvin family as part of their work on schizophrenia. Thus, we hear about Dr. Lynn DeLisi and Dr. Robert Freedman. We also watch as the various brothers are admitted repeatedly to mental institutions and prescribed strong drugs that don’t really seem to help. Indeed, two of the sons ultimately die because of ill effects of the drugs they take.

The last part of the book looks at the story from the perspective of the two sisters, Lindsay and Margaret, as they come to terms with their family’s past and worry about the genetic risk of the next generation should they choose to have children.

This book was clearly written. It made complex issues understandable. But the quantity of tough subjects it covered made reading it difficult. It would be nice if the research done on the Galvin family gave researchers a key to understanding, curing, and preventing schizophrenia, but sadly, that is not the case.

Want something lighter to read? Please try my blog and/or my new book, Love, Loss, and Moving On. Thank you! 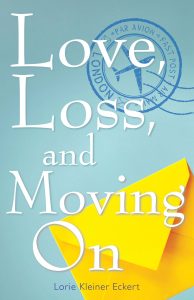