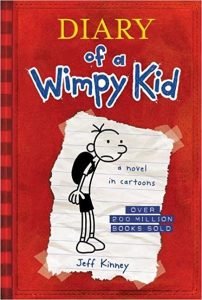 Recently, the New York Public Library released a list of the children’s books that were checked out the most in 2022. Astonishingly, all of the top ten books were in the Wimpy Kid series by Jeff Kinney. The series is about the life of a middle school child named Greg Heffley. Currently there are seventeen books in the series and 275 million copies in print. If that isn’t amazing enough, there have been movie adaptations as well – four live action movies and two animated versions.

Since I have grandkids who own many of these books, I thought I’d read one to see what Jeff Kinney’s work is all about. My twelve-year-old grandson said I should start with the first book in the series so that I could meet all the characters. After that, he said, I could read the books in any order.

Thus, I started to read and I met Greg’s family – his parents, his older brother, Rodrick, and his little brother, Manny. I also met his good friend, Rowley. And believe it or not, there is a “famous character” in the book – a slice of cheese, from which a person can get “Cheese Touch.”

To give the flavor of the book, here are three cute quotes.

Greg tells us, “I don’t know if I mentioned this before, but I am SUPER good at video games…Unfortunately, Dad does not exactly appreciate my skills. He’s always getting on me about going out and doing something ‘active’…I’m sure Dad would dismantle my game system if he could figure out how to do it. But luckily, the people who make these things make them parent-proof.”

He also tells about Rowley: “We were getting our stuff from our lockers at the end of the day, and Rowley came up to me and said, ‘Want to come over to my house and PLAAYYY?’ I have told Rowley at least a billion times that now that we’re in middle school, you’re supposed to say ‘hang out,’ not ‘play.’ But no matter how many noogies I give him, he always forgets the next time.”

And finally, here is what we all need to know about the cheese: A piece of cheese had been sitting on the blacktop near the basketball court since the end of the last school year and is still there the first day of the new year. No one would play on that court even though it was the only court with a hoop and a net. A kid once touched the cheese “and that’s what started this thing called the Cheese Touch. It’s basically like Cooties. If you get the Cheese Touch, you’re stuck with it until you pass it on to someone else.”

No spoilers here, but someone has Cheese Touch by the end of the book, which sure makes a person want to read what happens next…

Bottom line? The book was a fun read and I recommend it to anyone wanting to bond with a middle schooler!