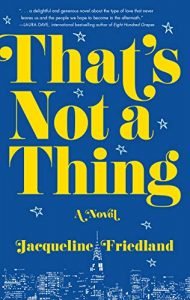 Torn between two lovers, that’s Meredith Altman. Wesley Latner is the guy she fell crazy-in-love with in college in 2008. But he’s the one who left her four years later, just before their wedding. He left after accusing her of killing his parents. (We learn this in chapter one, so it’s not a spoiler.) So great is his need to be away from her, he moves to another country.

She eventually gets her life back in order and we meet her again five years later. She is now an attorney on the verge of marrying a doctor, Aaron Rapp. This is when Wesley returns to the United States and reappears on the scene. He arrives with a secret that would tear at anyone’s heartstrings, as it does Meredith’s. Before long, that second wedding is at risk.

I particularly liked that family plays an important role in this book. Not only Wesley, but Aaron and Meredith too, have close bonds with their parents.

The who-will-she-pick-and-why element of the book makes this a compelling read as is the need to find out [What’s] Not a Thing.