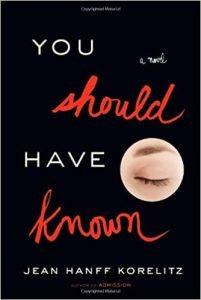 Grace Reinhart Sachs is a psychologist who often counsels couples. She sees many women who SHOULD HAVE KNOWN from day one that the man they ultimately married was not right for them! Indeed, she has written a book that is soon to be released and it is called, You Should Have Known, which warns women to pay attention to their first impressions of men.

Little does she know that her own life is soon to fall apart as she comes to know lots of things about her husband that perhaps she should have known from day one! He never really gets labeled in this book, but pathological liar is at least a part of a correct diagnosis for Jonathan Sachs, a charismatic pediatric oncologist at a major hospital who is also a womanizer and a murderer.

This book was slow at times but at other times I just could not put it down as I needed to know what would happen next. Overall, I liked it very much.

Two notes in closing: First, David E. Kelley has adapted You Should Have Known as a limited series for HBO, starring Nicole Kidman, Hugh Grant, and Donald Sutherland. The series aired in the Spring of 2020. The title for the adaptation was The Undoing.

And second, this author has a new book that is likewise hard to put down. It is called The Plot, and I highly recommend it.