A family full of secrets 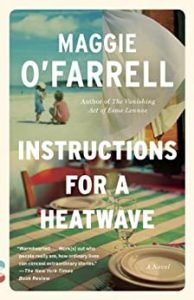 I loved Maggie O’Farrell’s book, Hamnet, and so I tried another of her stories. This one has a copyright date of 2013. It is set mostly in London over a four-day period in July, 1976 and is the story of the Riordan family. Gretta and Robert are the parents, originally from Ireland. They have three adult children. Michael Francis and Monica live in England, while Aoife lives in New York.

I have to confess that every time I read this child’s Irish name, it tripped me up. We are told it is pronounced halfway between Ava and Eva, while also blending the f and v sounds. I think the author chose such a name because Aoife has tripped up the entire family since her birth. Indeed, the impact of having a child seems to be a main topic in the book.

As the book opens, Robert has disappeared and all the kids have come home to help find him. Of course, all the kids bring their personal problems with them.

Michael’s dreams were thwarted due to the birth of his first child, and now his marriage is on the rocks. Monica has some sort of deep dark secret involving motherhood that ended her first marriage and weighs upon her second. And Aoife has a secret of a different sort – she is unable to read. Perhaps the undiagnosed reading problem led to her extremely difficult childhood that had repercussions not just her, but the entire family.

There were other secrets too. Robert has one, so does Gretta. Following the pattern, Gretta’s has to do with the impact of having children.

As she reveals her secret to her children and confesses to knowing a secret of Robert’s too, it is clear where they need to go to find him – to Ireland. Michael Francis’ wife and children join them on the journey.

As all the secrets come out into the open where they can be discussed, there is hope for happily ever after for most of the family members.

I’m not sure that I liked any of the characters enough to be happy for them, but I was pleased to be reminded – for my own life – of two concepts. First, that secrets can be corrosive. And second, that talking openly and honestly with my loved ones is the path to good relationships.