A Cure for an Emotional Funk? 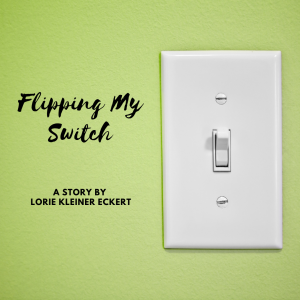 When I was a child, it was interesting to note that my mom had two different voices. There was the one she used to talk to my brother, Dad, and me and the one she used when she answered the telephone. It was a happy, friendly gal on the phone and a subdued person in actuality. I’m not blaming Mom for being a tired homemaker; I’m learning from her example: Flipping the ON switch in life is always a possibility.

Recently, in the throes of an emotional funk, I decided to flip my switch and to see what would happen. Thus, I signed up for four classes over an eight-week period of time. I learned something from each of the classes though half the time NOT exactly what the instructor had in mind. There was also the overriding lesson about switch-flipping that I will get to later. But for now, let’s enter the classrooms.

The title of this five-week class was perfect for me in the aftermath of my recent “retirement.” I discovered the class online and signed up for it at 3:00 PM on Wednesday, September 21st. That was exactly one hour after the first class ended. As the perennial good girl, missing a class was odd behavior for me.

Plowing ahead, I put the other four dates on the calendar only to find I had conflicts for weeks two and three! Forgiving myself, I planned to attend the last two sessions. I made it to the fourth class, but had to skip session five when two of the grandkids needed my help.

Clearly, there was no attendance prize for me, but there was a lesson learned: Not everything is stress-worthy. When I sign up to do something fun, there is no reason to make it stressful instead. No need to kick myself. The one class alone was enjoyable. Amen.

Class #2: How You Became You

I loved the title of this class, and I hoped it would explain me to me in a psycho-social sense. Whenever I meet a new friend, I suddenly realize that all my adorable quirks and idiosyncrasies are strange aberrations instead. I come away from such situations wondering how on earth I got to be this way. I hoped this class would have the answer.

Imagine my surprise when the topic of the class was human biology! It was interesting to note that we all started as one cell. By the time we were babies, we were composed of 26 billion cells. By the time we were adults, we had 35 trillion cells. However, I’d rather know why it is that I am so rigid with my daily routine and how I might un-become those parts of myself that are unbecoming?

I learned a lot from the teacher beyond mitosis: When signing up for a class, I need to read the school’s description of the class, not just the title. This one said the presenter was a retired biology teacher who would take us “through the mystery and mysterious functioning of around 200 different cells, beginning with a fertilized egg.” A broader lesson reminds me to exercise due diligence in all aspects of life even when signing up for a one-day class.

Hoping to learn that a balanced diet is a cookie in each hand, this class gave me a reality check instead of a chuckle. Actually, I knew all of this information, but seeing it in one concise list was disconcerting. As we age we have:

As the instructors – a nutritionist and a med student – discussed these topics, my main takeaway was that exercise, hydration, and a good diet are more important than ever. Argh!

But here’s a joke to consider: It is said that maybe psychopaths are just regular people on a low carb, sugar-free diet. With this thought in mind, I amend the class’s takeaway to include this reminder: Moderation in all things is important; into every life a little junk food must fall.

There were twenty people in the class and ten tables. Ten of the participants chose a table at which they stayed for the remainder of the session. The other ten rotated from table to table visiting each for four minutes of getting-to-know-you conversation. Then a bell rang, and it was time to move on to the next table and the next new-friend-to-be.

This turned out to be loads of fun and slightly crazy. Each time we moved to a new table, the din in the room got louder as we got more accustomed to what…being friendly? Actually, we were like my mom at the start of the story; we put on our telephone voices and adjusted our dials to a happier frequency.

And that’s the main takeaway from this four-class adventure…

Flipping the ON switch in life is always a possibility. To even sign up for classes was flipping a switch. Remembering to put on the friendliest version of myself was flipping another. I’m not going to say my emotional funk is now gone, but it is interesting to note it wasn’t present during my ON-ness.

More classes may be in my future. Stay tuned…

Here’s my M.O.: I tell the stories of my life hoping others can find life lessons in them. AND I function as a cheerleader with the core message: Life can be difficult but you can handle it. Like these topics? Then try my blog and/or my new book, Love, Loss, and Moving On. And tell a friend!