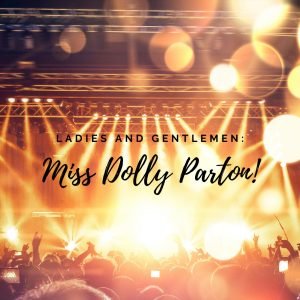 When my daughter was nine or ten years old, she had a moment of bliss brought to her by Dolly Parton. As a fourth grader, Lisa was required to read lots of library books, and that’s how a biography of the performer entered our lives. The book was called Coat of Many Colors. Lisa and I both read it, and loved it, and admired Dolly as a result. That same year, Dolly appeared live and in concert in Cincinnati. We made sure to attend. Though I don’t remember Dolly’s performance at all, I will always remember the concert. When Dolly walked onto the stage for the first time, the look of awe and delight on Lisa’s face was worth ten times whatever I paid for the tickets. I have appreciated Dolly ever since.

Because of this, I recently watched a documentary on Netflix, Dolly Parton: Here I Am. It was created in 2019 to honor her 50th anniversary at the Grand Old Opry in Nashville. With a career that long, you can bet there are lots of life lessons to be gleaned. Here are five that are worthy of mention.

It is astounding that Dolly has written over 3000 songs. Since she is 75 years old, that’s akin to writing 40 songs a year since infancy. The impetus to write has taken many forms. She began writing as a child. As the fourth of twelve kids, her early songs – stories set to music – were written to entertain her family. She also wrote as a form of therapy. We see this in autobiographical works like “The Coat of Many Colors.” It tells about the box of rags someone gave her family and the coat her mother made from them. Though teased about the rag coat at school, Dolly clearly knew every stitch was made with love, which was its own kind of riches. Dolly also wrote as a calming agent in her life. Whereas other stars used drugs or alcohol to come down after a performance, Dolly wrote songs.

Even for big stars, life has its ups and downs

In 1985, after two decades of working together, RCA dropped Dolly’s contract because her records were not selling. This was in spite of her megahit five years earlier when she recorded “9 to 5,” a song that that became an anthem for working women in the United States, a song that went Platinum in the US and in the UK. Like anyone who gets laid off after years of faithful service to an organization, this was a blow to Dolly.

Seven years later, Dolly went from this career low to the highest of heights. Here is the full story: In 1973 Dolly wrote and recorded the song, “I Will Always Love You.” She wrote it as a way to tell her business partner and mentor, Porter Wagoner, that it was time for her to leave his show and to start a solo career. Dolly reports that Elvis Presley loved the song. Indeed, Priscilla told her that Elvis sang it as they walked out of the courthouse when they got divorced. Elvis wanted to record it, but he wanted to buy all rights to it, and Dolly declined to sell. Dolly says it broke her heart that he never performed it. NOT selling to Elvis proved to be a wise business move. In 1992 Whitney Houston sang it in the film, The Bodyguard and turned it into one of the best-selling singles of all times. It has sold over 15 million physical copies. Dolly says this made her rich. The internet agrees, stating that Dolly made ten million dollars from the song in the 1990s alone.

Philanthropy is important, you gotta give back

Dolly Parton never had children of her own, but she has helped thousands of children since she founded the Imagination Library in 1995. Understanding that children from her rural hometown start school with a disadvantage due to the lack of reading materials in their lives, she sent every child in Sevier County a book a month – mailed and addressed to the child – from the day they were born until they reached kindergarten. The program was 100% free of charge to the child and his/her family. The program was so successful that it has grown to serve children of low-income families in all 50 states, Australia, Canada, and the United Kingdom. As of 2018, over a million books have been given away. Dolly dedicates this endeavor to her father who never learned to read or write.

Though this next bit of philanthropy happened after the filming of the documentary, it is important to note that Dolly donated a million dollars to help fund Moderna’s COVID-19 vaccine.

The most poignant line in the documentary was uttered by Jane Fonda, a friend of Dolly’s since they and Lily Tomlin starred together in the movie, 9 to 5. Jane tells us that to prepare for the movie, the women had various weekend getaways to bond. Additionally, she has been a guest in Dolly’s home. But through it all, she has never seen Dolly in anything less than “full Dolly regalia.”

Though putting your best foot forward is a fine concept, I ached to hear this comment from Jane Fonda. What a heavy burden it must be to have to be Dolly Parton every day! I hope that like the rest of us, Dolly takes days off to hang out in her jammies sans all the makeup, wigs, and glamor. That’s my wish for Dolly.

Here’s Dolly’s wish for you

But of course, I’ll tell a story first: In 2004, Dolly got a new manager, Danny Nozell, after seventeen years without such representation. Immediately prior to signing with him, she put out three bluegrass albums that were critically acclaimed, but which did not meet commercial success. Furthermore, a European tour with those albums found her in small venues. It was another bad time for Dolly.

But with the new manager, she was on the rise again. He sold out arenas in twenty-one cities giving her the largest solo tour of her career. Her audience was composed of people ages three to seventy. And how did she choose to close her shows? With her rendition of “I Will Always Love You” and with this wish for her audience –

I hope life treats you kind,

And I hope you have all you ever dreamed of.

Oh, I do wish you joy

and lots of happiness.

But above all this,

I wish you love.

It’s such a beautiful song. If it were the only thing she had ever written, it would be enough. More than enough. But instead, we have over 3000 songs – and lots of life lessons – from the incomparable Dolly Parton. She is a woman I greatly admire.